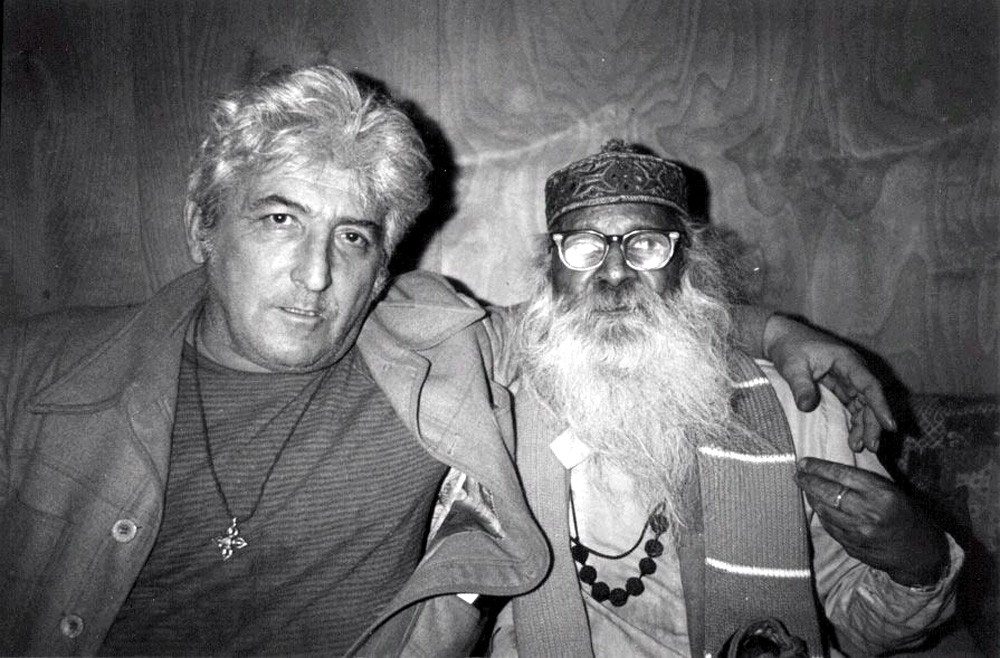 The following article appeared in the Erie Times-News SHOWcase Thursday, August 4, 1983. The Literary Life | A Weekend of Writers and Poets at ClaySpace by Rick Lopez; research by Lonnie Sherman

Jack Micheline, a beautiful white-haired bear of a man, stalks the stage, belting out “King Majesty, drunk with awe / Quiet, tired, restless city / Black tar in the night, black tar in the night!” Vision released, the crowd responds, bursts into applause. Considered one of the greatest of “performing” poets, Micheline is a fire that feeds on audience reaction. Swooping, arms waving—a prince, a hawk, a wild bird. His is a creative voice who speaks to Everyman. You do not have to be “like poetry” to love Micheline. I sit, stunned, listening to a taped reading by Micheline given in Boulder, Colorado last summer. It is difficult to distinguish where his poems begin and end; the comments he makes between them are delivered in the same spirit, the same voice.

“See I don’t write just poems. It’s got to do with notes and sounds. It’s like some black cat with a box goin’ into a jam session and lettin’ go certain notes.”

Poet, rebel, composer of songs, one of the greatest writers ever to dance his words across a stage. Words with a difference. His performances are crescendos of visual enthusiasm and aural excitement, each poem strengthening the bond he forges between himself and his listeners. There is a moment of strained silence on the tape—Micheline remembering the source of a shared image. His voice catches. He chokes up, the crowd dead silent. Micheline is crying. “Y’know, sometimes you live’em,” he offers apologetically, and the crowd, also in tears, responds again. I’ve listened to this recording dozens of times, and the repetition does nothing to dull my emotional reaction. “If you get anything that’s real, you’re doin’ okay.” Tears well up every time. The Great Communicator is not the President of the United States, but rather a 54-year-old Russian-Romanian-Jewish poet from the Bronx.

In 1957 Micheline was living in a $12-a-month apartment in the Village in New York City. One day, he noticed a sign for a “Pocket Poet” series, and he decided to show some of his work. They were published in his first collection, River of Red Wine, which contained an introduction by Jack Kerouac.

“Jack wrote a beautiful introduction, and I became known because Dorothy Parker reviewed it in Esquire. My life changed a lot after that, gave me the courage maybe to keep going.”

Micheline says the period from 1955 to 1960 was one of great camaraderie among poets, painters, and jazz musicians in New York. His associates at the time included Jack Kerouac, Franz Kline, Bill DeKooning, Frank Lloyd Wright, Harold Goldfinger, Rainy Cass, Charles Bukowski, Seymour Krim, and Charles Mingus (with whom he read poetry to Mingus’ jazz). His works were influenced mainly by friends and by his own experiences in the streets. He credits his literary influences to Langston Hughes, Leroi Jones, Federico Garcia-Lorca, Henry Miller, and others. He has since put out several books and broadsheets with independent publishers (no university press will take on a book of poetry with lines such as “cowards wrapped in academidc cloth…”), and has written more than a dozen songs. Micheline is also a recognized painter amnd playwright.

Poetry of the Soul

Much of the poetry which we are exposed to is of an intellectual nature, which gives us “little fictions”—abstracted images offering a new view and added depth to their subjects. But there is another kind of poetry, a poetry of the soul, which gives us “little realities” that are sometimes too large for us. We react emotionally, from our human core. Intellectual poetry is like classical music, in that both are composed. Poetry of the soul, on the other hand, is that which comes roaring out from the hearts of men who will not compromise themselves or their words, a poetry which does not lend itself to editing or refining.

Jack Micheline has the courage needed to abandon composure and bare himself to the world. His form resembles improvisational jazz, with all the immediacy, power, and trueness of life as it is lived in “the madness of cities.” Where the poetry of e.e. cummings brings a mind-whirling pause and smile, Micheline reaches out and pulls tears from our eyes, claws at our hearts, shows us the beauty and pain of broken men and women: the poor, the hungry, and the destitute who survive “it all” behind the gilded facades of a society which refuses to turn around and take notice.

It seems we are all too inadequate for this world
no one is brave enough
strong enough
happy enough
man enough
beautiful enough.
No way.
There are no heroes or winners in this world…

eddie woods | either poetry or a machine gun