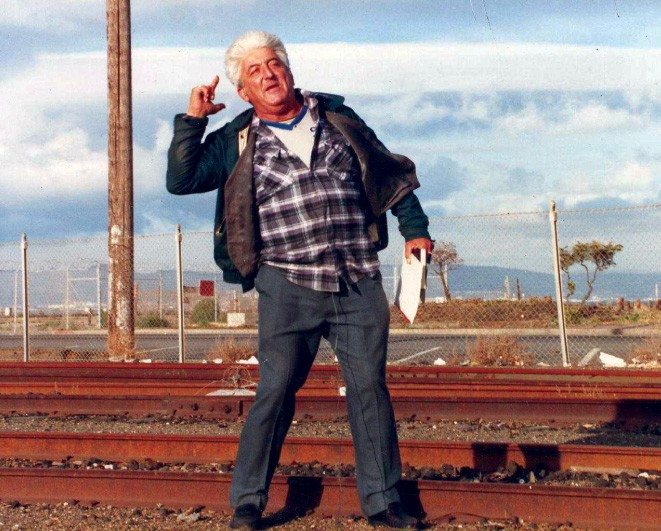 There is no cure for mortality.

We bend the sacred steel of living with our battered souls, shifting as we see fit in order to belong. The Russian madman laughing at the sky behaved like a bit of a paranoid split. Born Silver, Jack Micheline was human, and to be human is contradiction in and of itself. The man with the gray hat and khaki’s who peddled his books and paintings from a banged up suitcase, the man I knew was a great performer, could dance the word, wax jazz, had the need and seemed to reach out for the fix of living as he pitched the word. As poets, we often struggle to explain this need as LOVE. We swirl inside this stainless vortex as dark figures on the path. As the glory of moment. Jack had the gift of moment. Called Whitman’s wild child, he was also quite often, an almost unbearable pain in the ass, tolerated because he was sometimes capable of pulling daggers out of bleeding rock in the subterranean circus of hope. He had charm, had style. He liked the carnival wink of the con, the nickel/dime hustle, the broads, the bookies and the track and was captivated by the math of beating the odds; we call this seduction luck and try to rehearse it as if it could be owned. He could toss a good hand just to play the fool and was often drunk on bitter wine of his own terrible design yet witnessed the color all around him shouting, “beauty is everywhere Baudelaire.” He held imaginary conversations with greatness, pissed in lawyer’s shoes and carried arms against the oppressive filth of fuck. He railed at the system and success. It seemed his inner child was raised by wolves. He called himself genius, the ragged lion framed with bold primitive strokes as a cactus imbued with the wondrous ability of spinning images as a sweet balm for the prick of ignorance. He was often the fat Skinny Dynamite of pussy, dick, drink and hung his hat on the certain knowledge that every race must have a winner…

He stopped ticking on the BART train Friday, February 27th sometime just before noon departing San Francisco on his way to Orinda according to the obit. Gave up the ghost somewhere on the track singing, “WACKY DAKY DOO DAKY DOO… WACKY DAKY DOO, DAKY DOO. Hey that’s it kid, you got it, now sing baby, sing!” It’s a long ride and a fine line crossing over the inexplicable here to there. But yeah man, you got that music, that song, yeah baby, beauty is everywhere… the sound of traffic after midnight. The cat asleep in the lap of the abstract affirmative. The ordinary act of survival as we pull ourselves out of the sack to mount the day and hump the voluptuous light, any light. Nothing matters anymore. Forgive. Let the twisted pain of hatred pass. Exist outside the burning flesh of the present where one can no longer feel the bitter sting of this glorious hustle. Reach no longer, transcend this swirling wound of humanity and into the forever/now. You’ve beat the clock baby, time is in your pocket… GONG gong GONG gong GOING going GONE gone GONE MAN, GONE…like, gone! The beat of weeping butterfly. The beat of color. The beat of bleeding sidewalk firm with the purgatory of desire. The sure thing. Beat of feet, of skyline, of yes, of go on over to the bettor’s box and collect your winnings mad Jack because myth is bigger than trees, than the manic asphalt wilderness, than the need to be, to belong.

We will read him, talk about him and his work, publish him, have a few laughs and remember him for who and what he was: a sometimes cantankerous mother fucker and often a helluva poet and storyteller… a man of his own time and place who by and large seemed to live on his own terms. Can’t do much better that that. He was Beat, whatever that was, and it seems that when he performed was maybe the only time he was truly at peace or happy. He lived/loved to work a crowd.

Yes, he was the real deal as poet, no doubt, you can count on that one up to ten. I would assume that the folks in San Francisco will be mourning their adopted son for some time with their flowers in their hair, beat in hand jumping over the moon. That at least, regionally, he will be elevated to some kind of rock star status. He will be all myth now, much moreso than he ever was in life. He was obviously a friend to many… the broken, the broke. Was Bob Kaufman’s pal, A.D. Winans; introduced to the shindig via no spit on the ball Jack Kerouac. Blasted bop jazz poetic with Mingus. Broke bread with Ginsberg, Ferlinghetti, Bukowski and drank their grape… he built bridges to cross his raging river of red wine and he burned them with a take no prisoners attitude.

There is the victory of death and the temporary immortality of the word.

Jack Micheline was a poet.